A house that has stood the test of time

From Kaiser Wilhelm to Kölsch Convention

THE HISTORY OF THE EXCELSIOR HOTEL ERNST

Founded in 1863 by Royal Court Restaurateur Carl Ernst, our 5-star luxury hotel can look back on over 150 years of history and tradition. Within just a short space of time the Hotel Ernst became one of the most renowned hotels in Germany. From here, the first German Kaiser watched the completion of Cologne Cathedral. And over successive decades, we were able to welcome numerous artists, politicians and entrepreneurs through our doors as world history came to stay in our house. Even the Kölsch Convention was sealed in one of our ballrooms.

All our guests have contributed to this long history – and we look forward to many more in the future.

A house that has stood the test of time

Things that last just a few years are fashion. What lasts for decades is luxury. As a Grand Hotel with such a long history, we certainly love fashion, but the emphasis is definitely on luxury. And for us, this means attentive service, culinary sophistication and a warm and welcoming atmosphere.

Official opening ceremony. Carl Ernst, Royal Court Restaurateur at the Central Station, was the builder and owner of the new hotel in the city centre which initially bore the name Hotel Ernst. 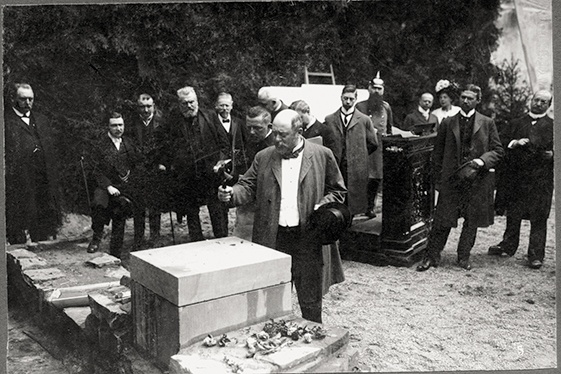 The hotel was sold to Friedrich Kracht, a citizen of German descent who had lived in Belgium but moved from Brussels to Cologne during the turmoil of war. Kracht died four years after acquiring the hotel; his wife and son Karl ran it after his death. 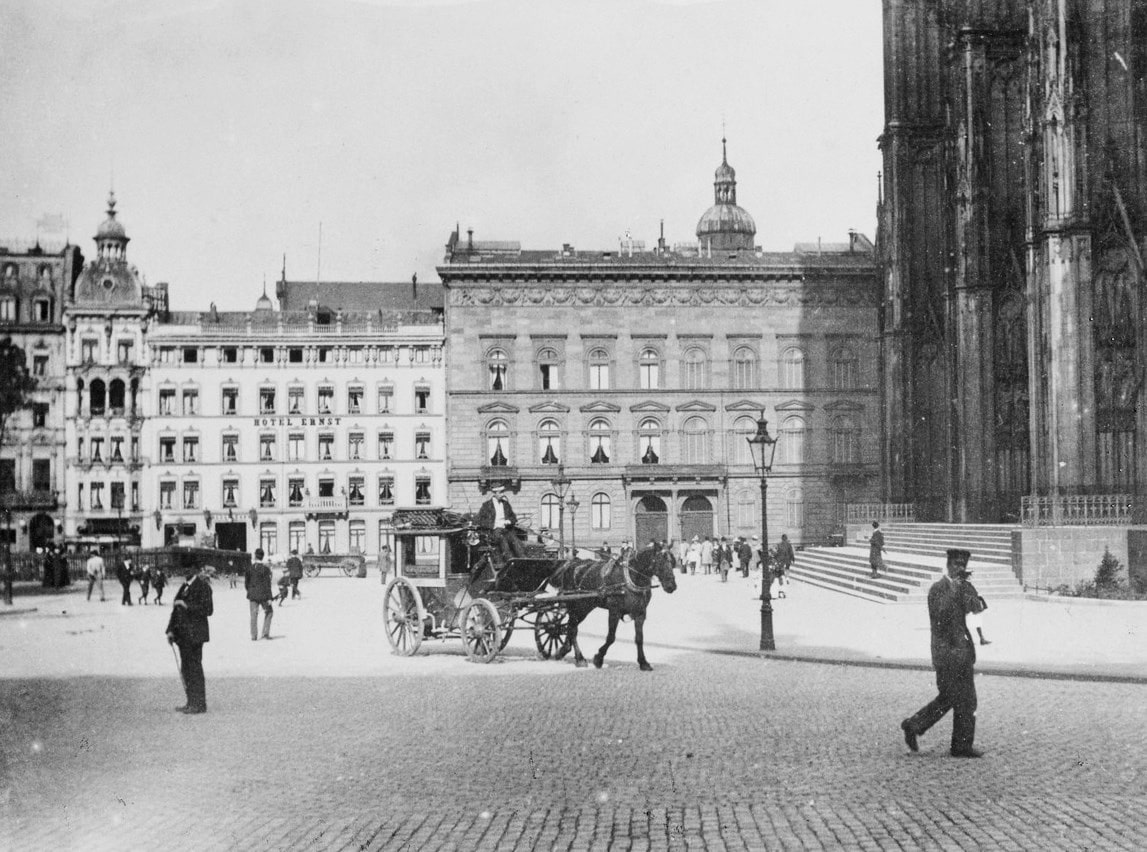 The management of the Hotel Ernst was transferred from the mother to Karl Kracht and his sister Hermine Brinkhaus. The siblings founded a GmbH (company with limited liability), which Hermine left three years later. Karl Kracht was now the sole owner of the Cologne hotel. He lived with his family in Zurich, where he ran the Baur au Lac.

Friedrich Reime was appointed director of the Hotel Ernst.

The Hotel Ernst was partially demolished and rebuilt in order to offer guests from the worlds of politics, nobility and industry the very best possible comfort. Completed in record time, it reopened as the 5-star Grand Hotel Excelsior Hotel Ernst. The suffix Excelsior comes from Latin and means “ever upward” or “still higher”, emphasising the guiding principle of always offering our guests the very latest in comfort. Guests in the refurbished hotel were astonished to find that 60 of the 200 rooms now had a private bathroom – at a time when running water was still a novelty.

After the signing of the Treaty of Versailles, the hotel became the headquarters of the British troops. 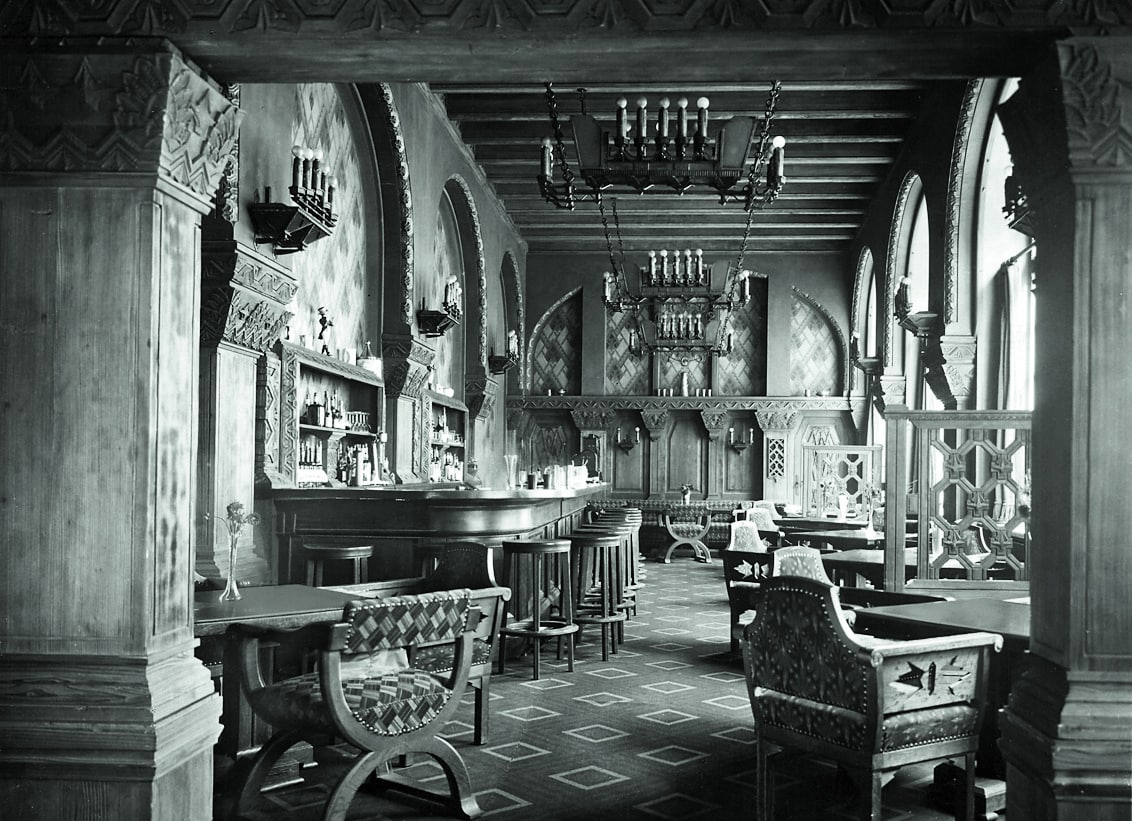 After the British troops left Cologne, the 5-star Excelsior Hotel Ernst celebrated its reopening – still managed by Friedrich Reime, who ran it until 1938.

In 1943, Cologne was subjected to heavy air raids, one of which hit the Excelsior Hotel Ernst. The roof truss and attic both burnt out, and the roofs of the adjacent houses in Trankgasse – the Deichmannhaus and the Hotel Fürstenhof – were also destroyed. However, the first four floors of ourluxury hotel remained intact, so operations were able to continue at least until 1944, even in the challenging circumstances of wartime.

These were dramatic months. When director Max Mattheus left the hotel with the last remaining staffon May 2 1945, just before the end of the war, he pinned a letter of protection to the outside of the building, marking the hotel as Swiss property.

In September 1945, the luxury hotel won permission to resume operating its hotel and restaurant business. Initially it was requisitioned by the British military administration. But plans were soon made for the reconstruction of the destroyed parts of the building, and after the currency reform in June 1948, the Excelsior Hotel Ernst was finally able to fully reopen.

Erico Geweyer became managing director of the Excelsior Hotel Ernst – a post he would hold for 13 years.

Siegfried Breunig was appointed as successor to Erico Geweyer, who died in March 1971. Numerous renovations and modernisations were carried out under his leadership in close cooperation with Charles Kracht. The public rooms in the reception area, the Winter Garden and the Piano Bar were all renovated, and contemporary conference rooms were created.

The Restaurant Hanse Stube was extensively refurbished in the timelessly elegant style that remains so popular today.

The hotel underwent significant expansion. With the so-called rotunda and its 29 exclusive apartments and double rooms, as well as an impressive staircase crowned by a glass dome, new standards were set for guest comfort. The conversions and extensions were planned by well-known architect Siegward Graf Pilati from Munich. 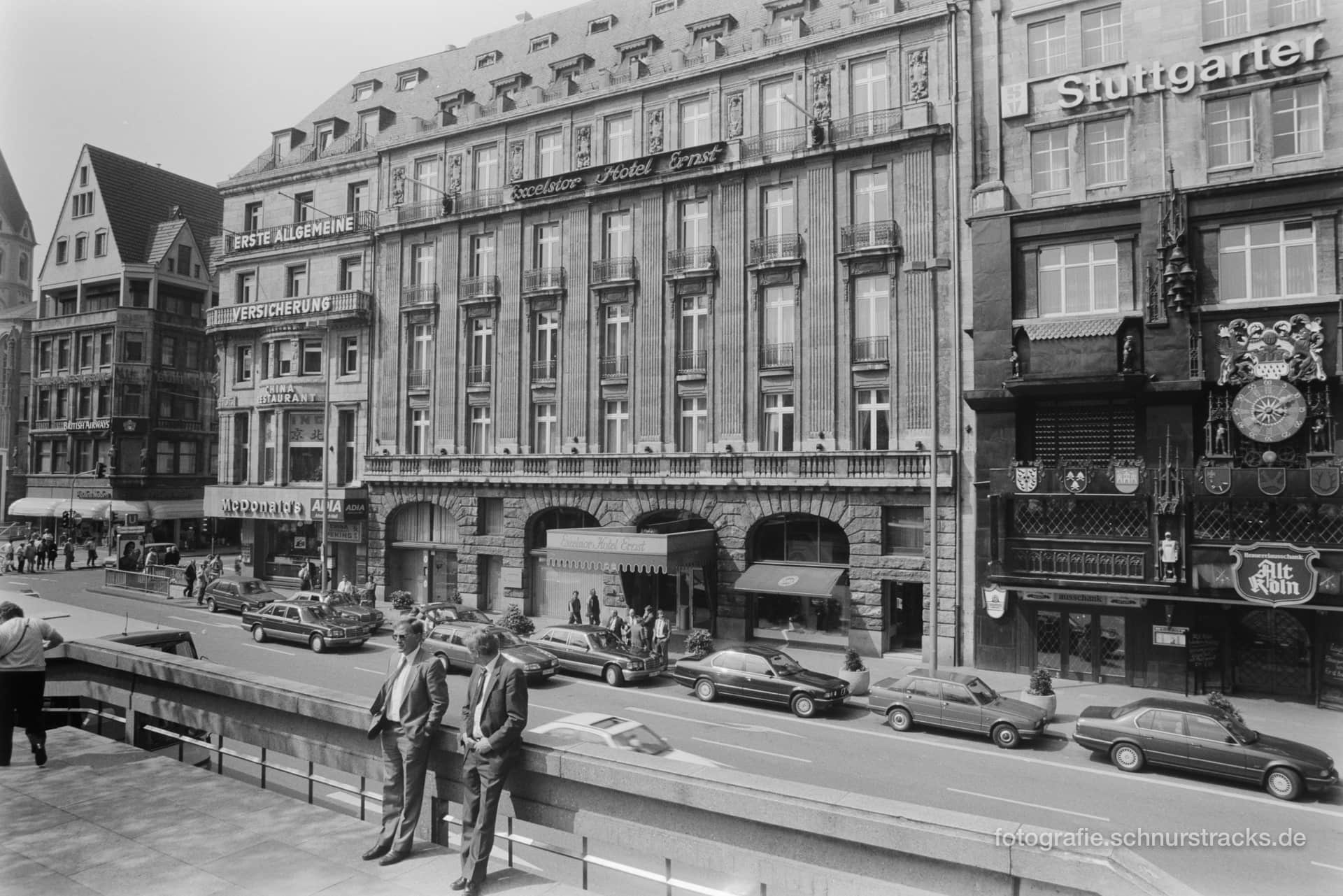 Charles Kracht, the family’s long-standing representative on the hotel’s board of directors, handed over the reins to his nephew Charles Roulet, who had returned from the USA after a successful career as a hotelier. So now it was a great-grandson of Carl Kracht who led the board of directors of this iconic business.

After the sudden death of Siegfried Breunig, Charles Roulet temporarily took over the management of the hotel.

Manfred Brennfleck took over as new director of the Excelsior Hotel Ernst.

An exclusive sauna area was created for guests on the sixth floor, with state-of-the-art fitness equipment, a dry and steam sauna, adventure showers and a relaxation room. 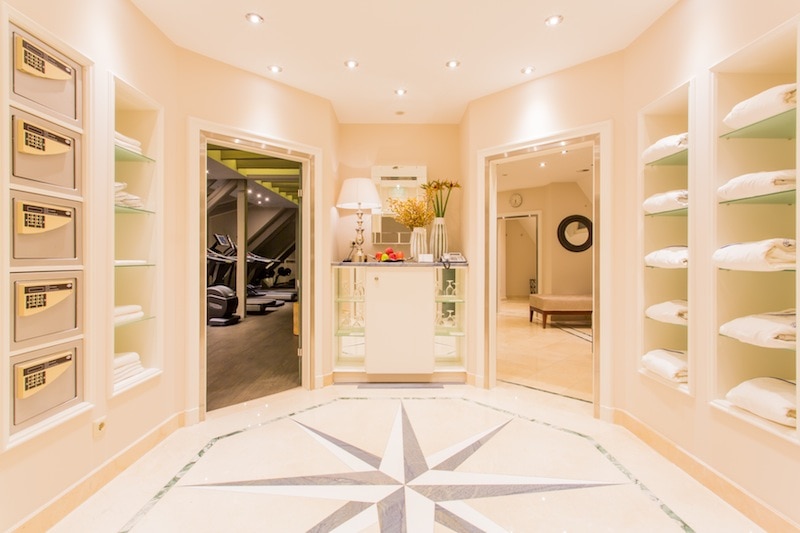 East Asian restaurant taku opened its doors as a house of Asian delights. Since then, exquisite dishes from the cuisines of various Far Eastern cultures have been served to our guests and visitors here, starting with puristic Japanese cuisine, through the somewhat heartier Chinese, to the spicier variants of Thai and Vietnamese delicacies.

A state-of-the-art business centre featuring the latest communications technology was set up – with free internet access, comfortable workspaces and all the equipment of a modern office.

Following the departure of Manfred Brennfleck, Robert A. Schaller managed the fortunes of the company on an interim basis.

Wilhelm Luxem took over the management of the hotel. Under the strategy of “Tradition & Innovation”, the rejuvenation of the hotel gathered pace.

The listed natural stone facade on the cathedral side of the building was extensively restored.

The renovation of the facade of the Hanseatic wing on Domprobst-Ketzer-Strasse was completed. The measures allowed the filigree facades to shine again in their former glory.

In the Hanseatic wing, 23 new deluxe double rooms, seven junior suites and five executive suites were built at a cost of seven million euros. Modern technology and traditional ambience came together here in perfect symbiosis. At the same time, the public rooms were equipped with the latest air conditioning technology.

The renowned Busche Verlag with its publications Schlemmer Atlas and Schlummer Atlas chose our taku restaurant as the best foreign restaurant in Germany and the Excelsior Hotel Ernst as Hotel of the Year 2010.

Our taku restaurant celebrated a very special occasion: the award of its first star by the Michelin Guide.

Henning Matthiesen took over the management of the Grand Hotel. With sensitivity and a careful hand, he implemented some important modernisations. The conversion of the entire hotel lobby into an inviting lounge area crowned his first successful year.

The 29 Grand Deluxe rooms and a suite in the rotunda were extensively renovated. The rooms, which are spread over six floors, boast the highest level of comfort, pleasing colours and technical innovations that are discreetly integrated into the spatial structure.

After just six months of intensive construction work, the Marzellen wing was completely renovated. With 13 refurbished rooms and suites spread over five floors, and a new event room equipped with the latest conference technology, our Cologne Grand Hotel led the way again with facilities of the highest quality. 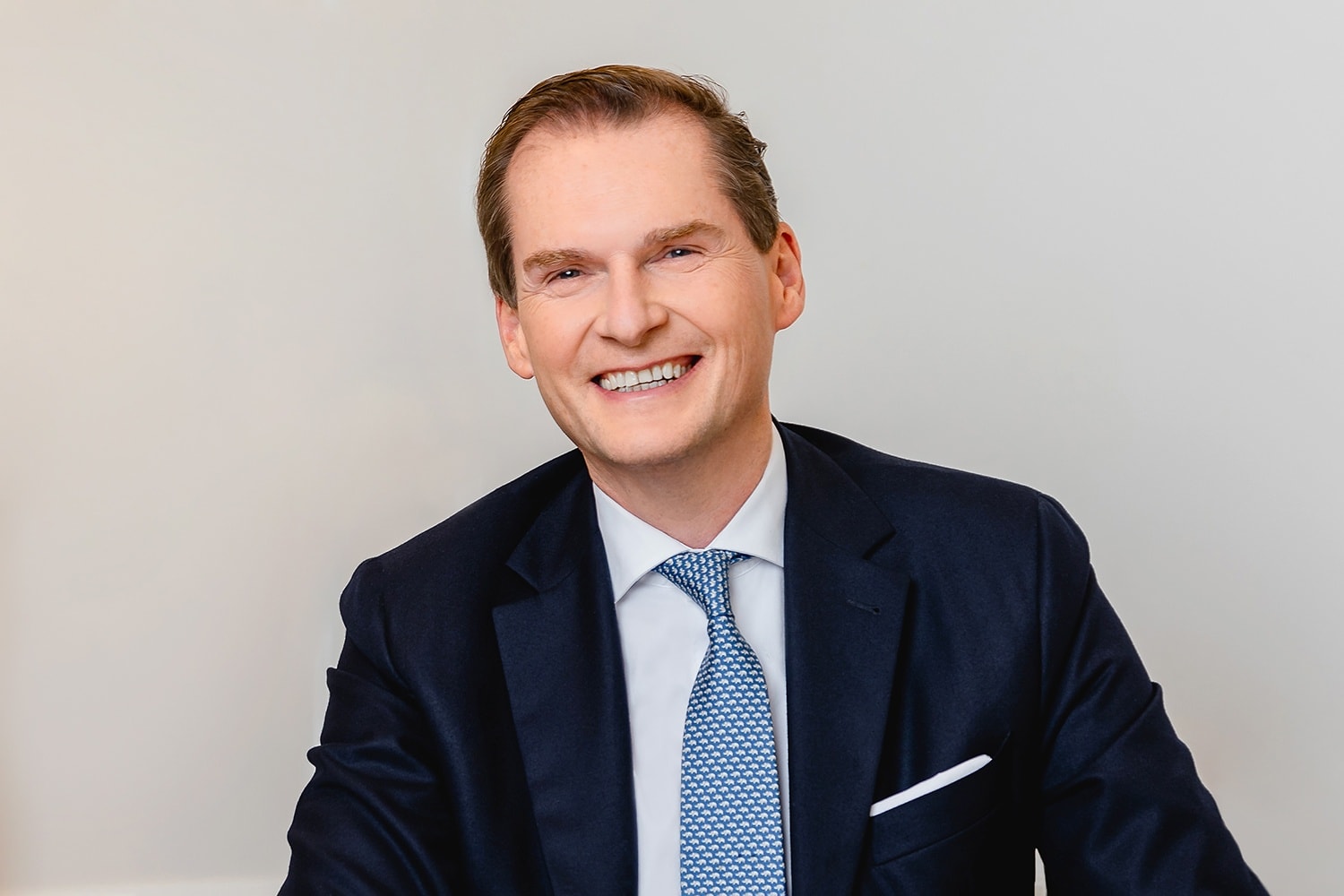 Georg Plesser is currently managing director of the Excelsior Hotel Ernst, with the aim of continuing to set new trends under the watchword “Tradition & Innovation”.